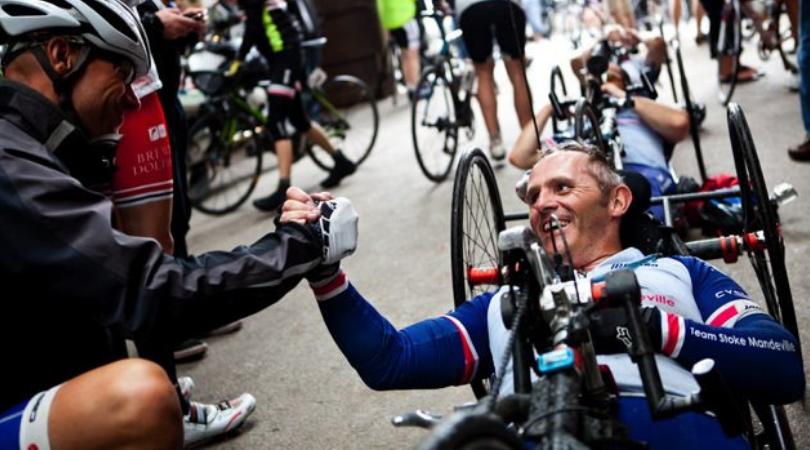 In 1996, Luke was involved in a motorbike crash and sustained a complete spinal cord injury at T6 level.

Luke, 46, says: “My injuries were so severe that I wasn’t expected to live through the first night. It makes me really appreciate that I’m still here.”

He was transferred to Stoke Mandeville, National Spinal Injuries Centre, to undergo his rehabilitation. The support Luke received from people in a similar situation to him kept him going during his time there.

“There were a number of people of a similar age there who were all going through the same thing. There was one person in particular who had a huge impact on me. She had been injured for six years and I met her when she came back into the centre for a procedure. She had children, ran her own business, and demonstrated that life could go on – albeit a bit differently. It really opened my eyes.” 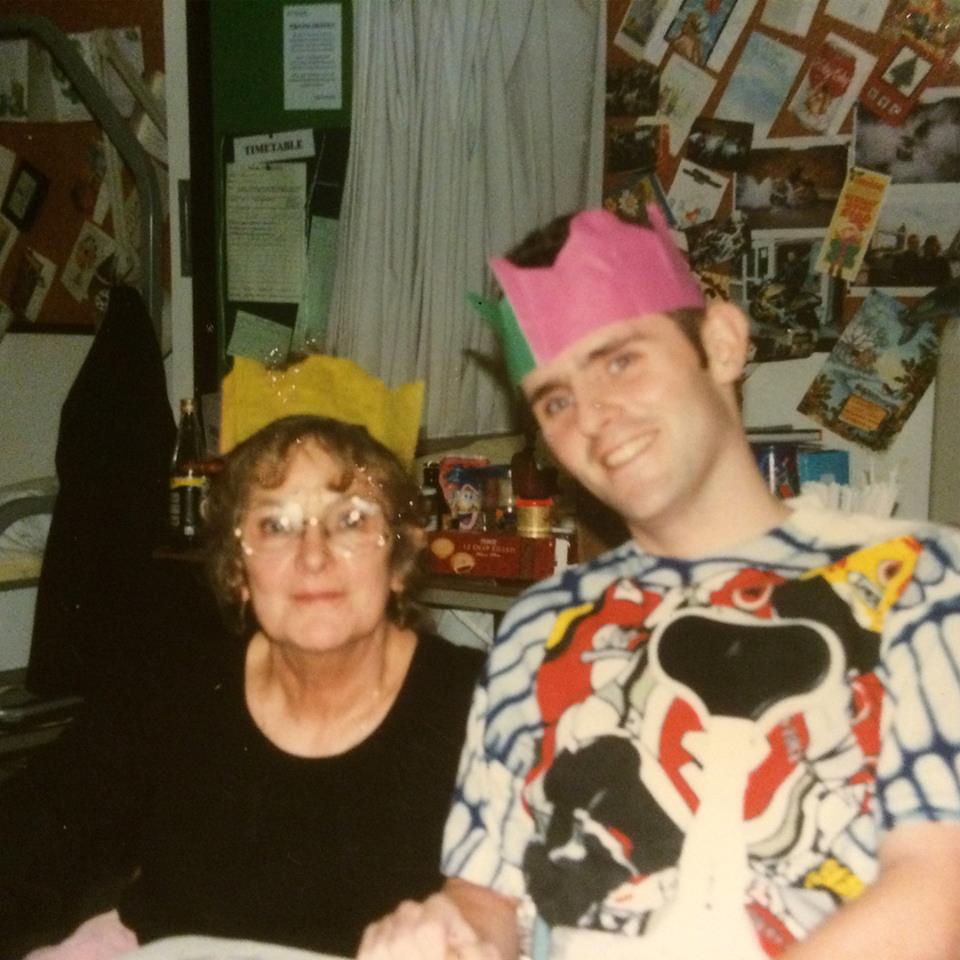 Luke enjoying Christmas during his rehabilitation

When Luke left Stoke Mandeville, he spent time at Headley Court, a facility for injured service personnel, as he was in the Royal Air Force when he was injured.

“I stayed there because I didn’t have anywhere accessible to live which is the main barrier for a lot of people. Thankfully, there were military charities that helped me find somewhere to live.”

Over the years, Luke has struggled with his mental health while coming to terms with his injury.

“There have been a number of times when I’ve not been in a great place, but I also know that there will be a time when things get better. I’ve allowed myself to feel how I feel and not try to suppress it.”

Luke makes sure that he has time for the things he enjoys like theatre and socialising with friends, as he believes is important to talk about the highs and lows of the day. He also knows that he’s able to stay more positive when he has a goal to work towards.

“I know that if I haven’t got a target or incentive, I can become lazy and despondent. That’s why it was really important for me to return to college to get more qualifications. This led into voluntary work and eventually back into employment.”

It was during this time that Luke reached out to Back Up. “I felt like I had sorted a lot of things out and I was looking for the next step in becoming more independent. I gave Back Up a call and talked to a staff member about all the activities that were available to me. I ended up going on a brilliant multi-activity course and I’ve been involved with the charity ever since as a mentor and a fundraiser.”

In 2012, Luke took on the London to Paris ride with his friend and former Back Up trustee, Danny Turnbull. Alongside Alan Cook, they were among the first hand cyclists to ever take on the three-day bike ride. Luke took on the challenge again this year in memory of Danny who sadly passed away in 2017. 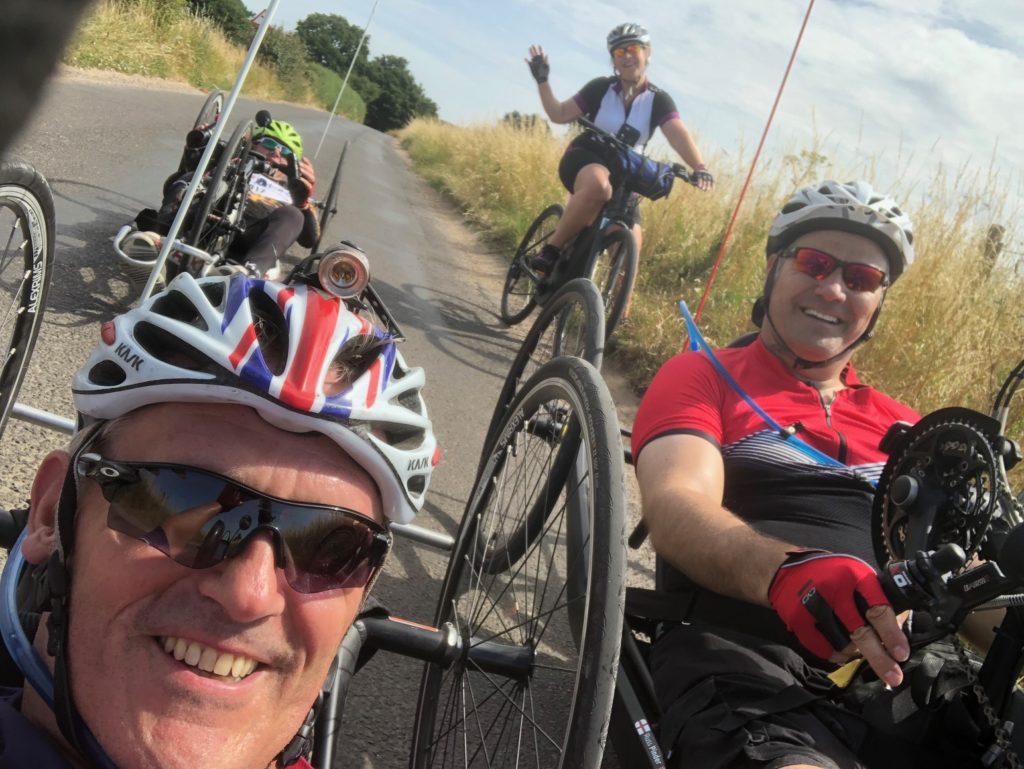 Luke and friends training for the London to Paris ride

“This year’s event was harder than the first time I did it, mainly because of the heat. The first time I did it with Danny it was emotional, so feeling those same emotions without him there was tough. It was an epic ride with some fantastic people for a good cause which made it all worth it,” notes Luke.

It’s been 18 years since Luke first got involved with Back Up and his life has changed a lot since then.

“Back Up was a massive stepping stone for me initially after my injury. I’ve never had a problem with confidence, but they helped me become even more confident in the person I could be in the future. I’ve definitely grown as a person.” 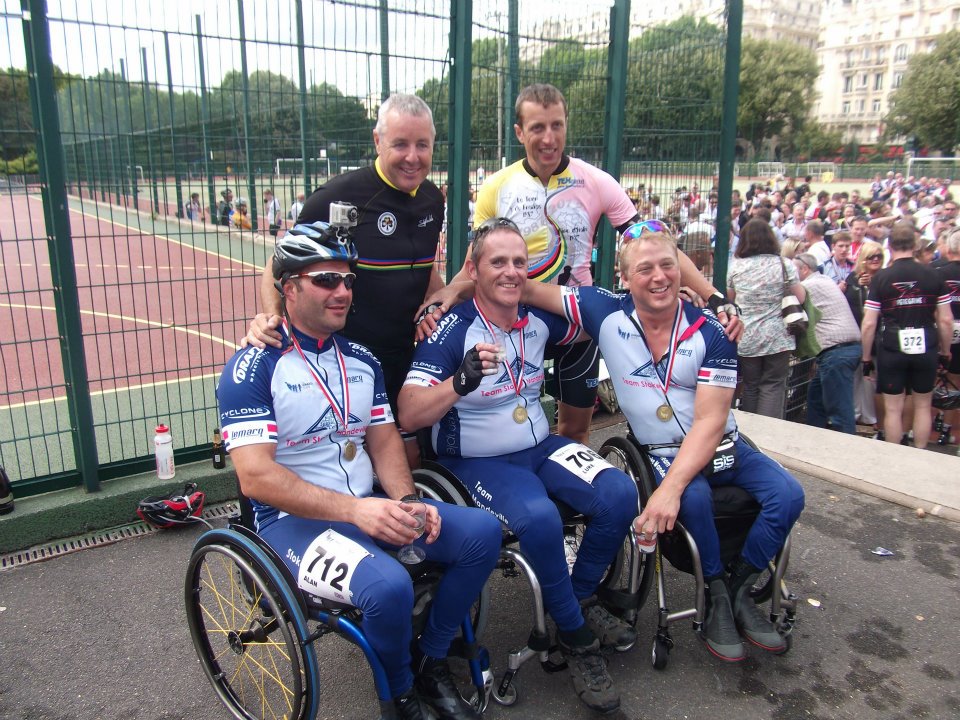 Luke, Danny, and Alan after completing their first London to Paris ride

Part of Luke’s confidence has come from being able to talk about mental health more openly.

“There’s a lot more awareness around mental health in recent times which I think is really important. Being a mentor can be hugely rewarding. Knowing that you’ve made a small difference to someone else can help your own mental health too.”

If you’d like to find out more about our mentoring service or becoming a mentor, please get in touch with our SCI Mentoring Senior Coordinator, Jacques, by email or call him on 020 8875 1805.

If you’d like to find out more about our challenge events, please email our Events and Challenge Manager, Emma, or call her on 020 8875 1805.