Most people agree that giving to charity in your will is a good idea – it’s the gift that won’t cost you a penny… now. But many stop short of taking action. We asked Sean, our Head of Fundraising, why he took the plunge.

Why did you decide to give a legacy?

Making a will is something that’s been on the to-do list for a while but has never seemed urgent enough to actually get it done. When my wife, Helen, and I had our first daughter that prompted us to get on with it. 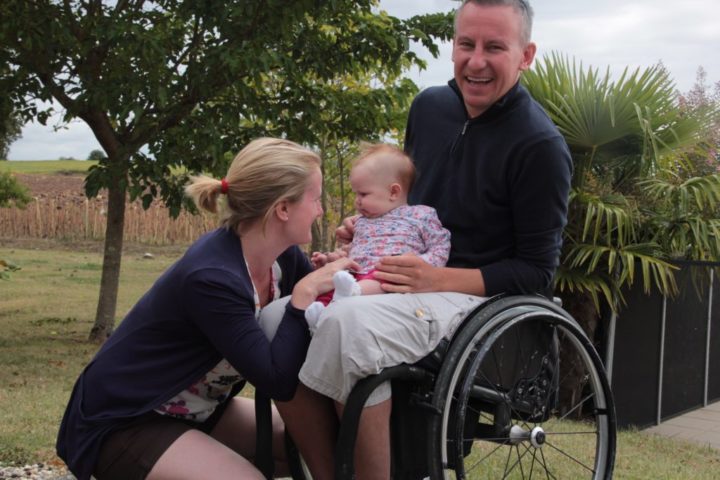 Sean and his family

I had a spinal cord injury as a result of a snowboarding accident in 2000 and Back Up helped me to get my life back on track. I went on a multi-activity course soon after leaving hospital and the following year I was out in Colorado skiing.

“I was back in the mountains doing something I never thought I would do again – it was amazing! Meeting Back Up was a game-changer for me – it opened my eyes to what was possible – and I haven’t looked back.”

Subsequently, I started volunteering at Back Up and now head up the fundraising team. I feel lucky to work for such a brilliant organisation. I get to see first-hand how we change people’s lives every day and how the money raised goes such a long way. Helen worked at Back Up for a few years too, which is how we met, so all in all I have a lot to thank them for.

Was writing a will straightforward?

“It was dead easy (sorry!) to sort the wills out.”

We booked an appointment with a legal consultant and she took us through a series of questions which took about an hour. As part of the process, she asked if we wanted to leave anything to charity which we were both keen to do. It feels good to know that you’ll be doing some good after you’ve gone (although I hope we have a good few decades left yet!).

Enquire about gifts in wills

If you’d like to talk to us on the phone or via email, please contact our Fundraising Manager, Janet, by email or call her on 020 8875 6760 to talk things through.