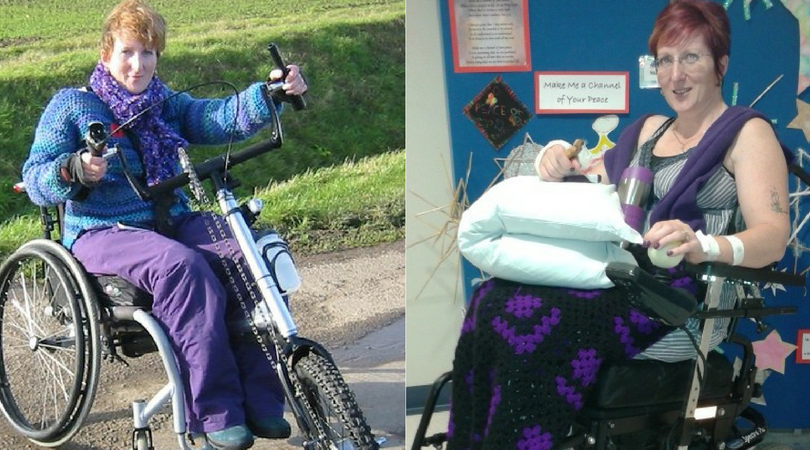 In 2001, Sharon developed Transverse Myelitis, a rare condition which causes inflammation of the spinal cord. By 2005, it had left her permanently paralysed below the T6 level.

Sharon, 47, spent a year in a local general hospital under mental health concerns and found the experience terrifying. ”I felt so despondent at that time, and I was made to feel like everything was happening in my head. It almost felt like a relief when I was told I had a spinal cord injury,” she says.

Things improved when she was transferred to Stoke Mandeville for her rehabilitation and this is where she first made contact with Back Up.

“When I reached the spinal centre and met Back Up, everything changed for me. I went on Back Up’s multi-activity course and, though it was a real challenge, it changed me.

”I went from feeling like life was completely over to feeling like I was starting again. My husband said that I came home from that course a completely different person.” 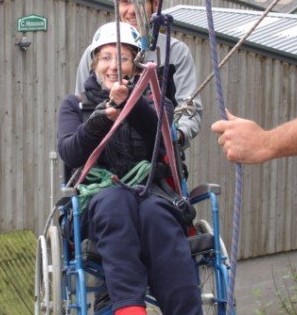 Sharon abseiling on our Back Up multi activity course

Sharon had often felt frightened and apprehensive of going anywhere. When she returned home from the course, she felt more confident socialising with family and friends. She decided she wanted to get out and about more and start fundraising for Back Up. She started to hold a monthly quiz, involving the local community and schools. It was only a matter of weeks before she was offered a job at a local school – similar to the kind of work she had been doing before her injury.

“I worked as a teacher for ten years before my injury, but I never thought I would have a job again after my injury. Working with children again was really important to me.”

It was around this time that Sharon discovered that Back Up had an education inclusion service and they wanted input from anyone interested in being a part of it. Sharon felt that volunteering was a good union of two major aspects of her life – spinal cord injury and teaching.

As an education advocate, Sharon supports children and young people with a spinal cord injury by going into nurseries, schools, or universities to talk about her injury. It’s a role she finds hugely rewarding.

“I supported a young girl with a spinal cord injury who excitedly told her mum about all the things that she wanted to do after watching my presentation. She hadn’t realised what was still open to her. During my talk, I spoke about all the places I’ve travelled to, the pyramids I’ve climbed, the courses I’ve been on, the fact that I still go to work, and more.

”She had resigned herself to feeling like she couldn’t do anything. I helped her see that wasn’t true.”

She knows that it’s important to let children and young people know what they can still achieve. This belief was key for her when coming to terms with her own injury. “Feeling like I could do things again was the message Back Up gave me when I first met them during my rehabilitation. They acknowledged that something devastating had happened but took me to places and showed me what I could do. I’m passing that onto the young people I support.”

Sharon finds that one of the most rewarding things about being an education advocate is noticing the change in the student and their peers. “Children no longer ask the girl I supported unnecessary questions. They no longer push her wheelchair when she doesn’t want them to. They don’t see her as such a different child anymore.”

Sharon in her garden on a snowy night

Using her experiences to help young people with a spinal cord injury give Sharon purpose and makes her feel empowered. “I enjoy supporting Back Up because they’ve made a difference to my life.  I love the advocate role because I personally need to feel like I’m doing something worthwhile and helping other people.

“I became a teacher because I hated school and wanted to change that negative experience for the children I taught. I guess the work I’m doing with Back Up is a continuation of that. I want other people with a spinal cord injury to know that they can still enjoy life and achieve.”

If you’d like to become an education advocate or use the service, please email our Education Inclusion Coordinator Jo or call her on 020 8875 1805.