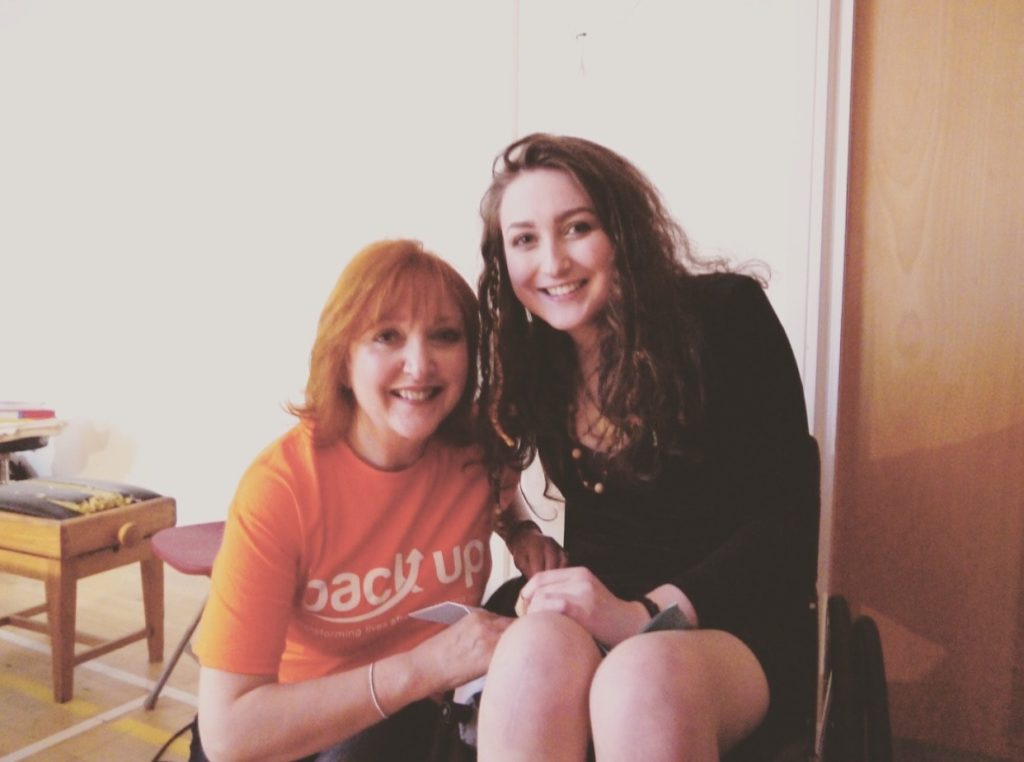 In late 2015, Rachel was involved in a road traffic accident in Ireland and, as a result, sustained a complete spinal cord injury at C6/7 level. The first few months of her rehabilitation were further complicated by the fact that her spinal cord injury was not diagnosed at the time of injury, meaning that she was not referred to a specialist spinal centre early on and was left having to make sense of this new confusing world on her own.

“I was sent home from the hospital as soon as I was deemed healthy enough to return home. I had to teach myself how to do everything; dressing, transferring, using the bathroom and much more. I really had no idea and no guidance. In the end I managed, despite the odds against me, mostly due to my positive, proactive attitude.”

It wasn’t until almost a year after her accident that Rachel had contact with Back Up. She met someone who had been on one of our courses and they contacted us on her behalf.

“Jacques, one of Back Up’s Mentoring Coordinators, got in touch with me and told me what Back Up was and what they do. I spoke to him about my situation and how I was struggling. Back Up came into my life at a time when I was fumbling between teaching myself one thing to the next, and I can’t express enough gratitude for their support at that time.”

Jacques matched Rachel with one of our trained volunteer mentors who talked her through personal care and strategies for coping with challenges. Rachel’s mother, Angela, also used the mentoring service. She was matched with a family mentor who was able to understand what she was experiencing. Having the chance to talk to someone in a similar situation had a profound impact on Rachel’s outlook on life.

“About six months after the road traffic accident, I had by that stage only met two spinal cord injured individuals and both were male so there were a lot of unanswered questions and worries around the female issues I was coming across. Using the mentoring service and speaking to another female who was also around my age was very beneficial – it made me feel like I was not the only woman in the world to have a spinal cord injury and deal with the things I was dealing with.”

After a few months, Rachel gained the confidence to go on our Lake District multi-activity course in May 2017. It was also here that she met Julie Hill, one of Back Up’s longest-standing volunteers, who she feels played a huge part in transforming her outlook and even encouraging her to apply to become a wheelchair skills trainer. It wasn’t long before Rachel and Angela decided that they wanted to hold a fundraising concert in aid of Back Up – ‘Chords for Cords’. 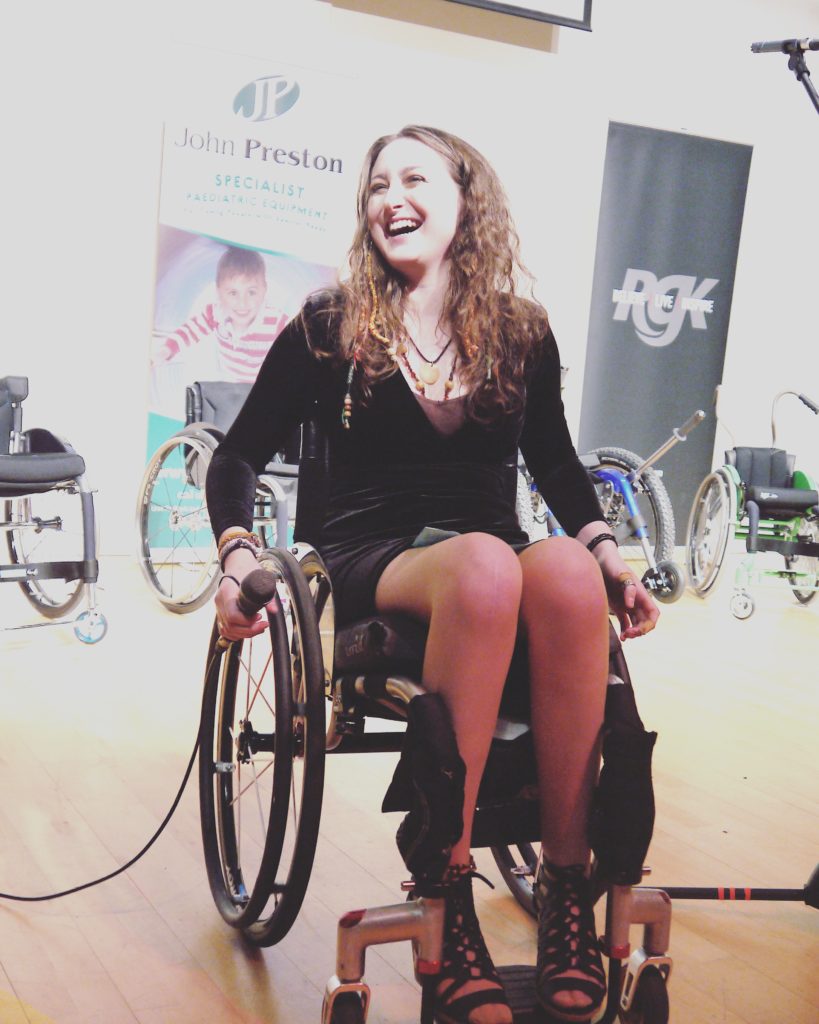 Rachel talking about Back Up at her concert

“We just had the idea of giving back because, personally, after I did the Lake District course, I didn’t feel like a different person and yet, I absolutely was. We just felt like we needed to give back because Back Up has just been there in every aspect of our lives.”

With their extensive experience in performing arts and music, Rachel and Angela rounded up their contacts and secured a venue, their local school hall, kindly donated to them for the night by the principal who had worked with Rachel on several shows before she was injured. With an impressive turnout of over 300 attendees and over £3,000 raised, ‘Chords for Cords’ proved to be a huge success. 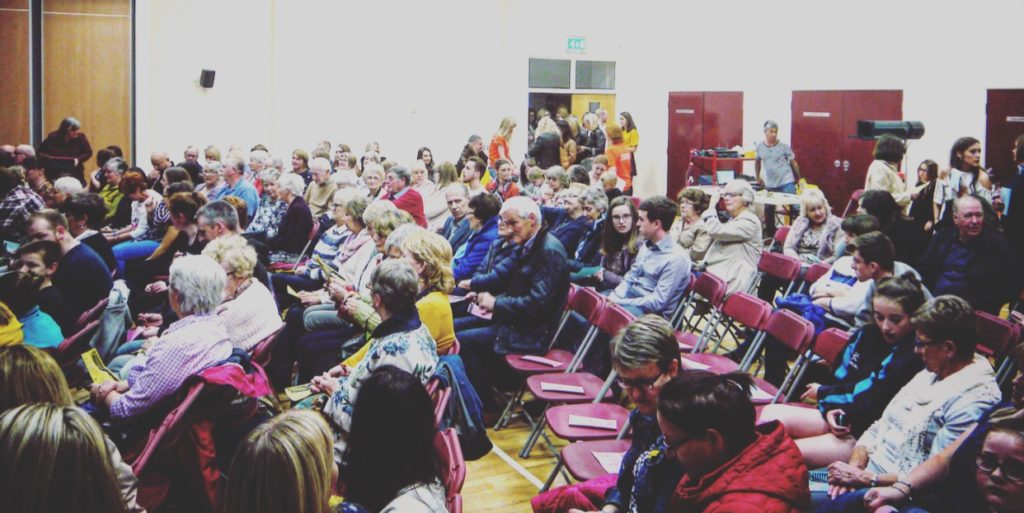 The audience watching the show at Chords for Cords

“Having that many people hear about Back Up, spinal cord injury and finally understand that there are still lots of opportunities for people with a spinal cord injury was amazing – it really changed peoples’ perspectives. I’m just really happy that I’ve been able to bring Back Up to Ireland in this way and hopefully will get more spinal cord injured people, who had no idea that it existed, into Back Up.”

Rachel has discovered more and more ways she can get involved with Back Up, including volunteering as a wheelchair skills trainer, and as an ambassador going to schools and colleges talking about Back Up and spinal cord injury. She loves volunteering and continually connecting with other people within the spinal cord injured community.

“It’s just the sense of immediate support – not in the future, not whenever something happens, or something massive in your life changes. It’s right now. It’s who you are and where you are right now, whether you’re going back to work or not. That’s really what Back Up means to me – it’s making you feel like an individual who’s involved with the most wonderful community that there is out there.”

If you’d like to hold your own fundraising event, please get in touch with our Community Fundraising Manager Kat, or call her on 0208 875 1805.